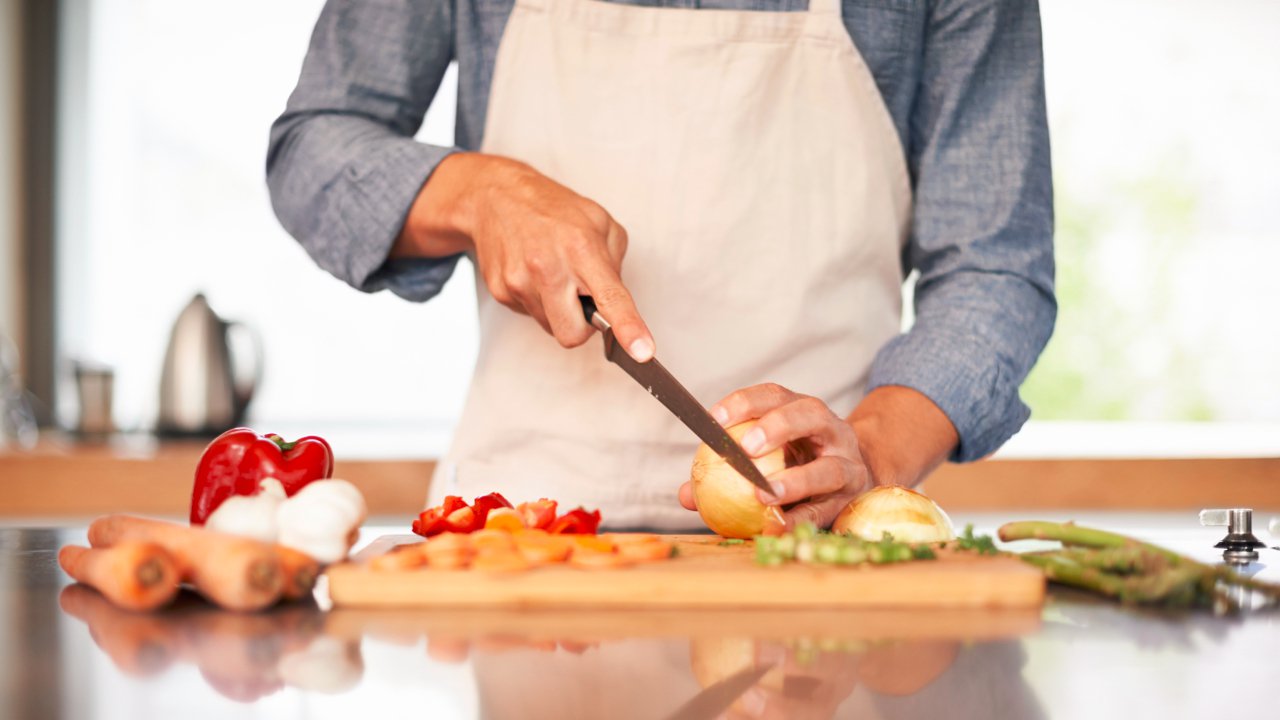 It’s rare to find a recipe that’s just like that one extremely soft and comfortable sweater everyone compliments you on even though you can’t figure out why. You wore it because it’s the closest to a Snuggie you could get away with at work, yet somehow people think you’re really put-together. That’s this recipe. It’s warming, thanks to a subtle sprinkle of cardamom and a flood of coconut milk. It requires under 10 ingredients. And, best of all, it’s a sophisticated weeknight vegetarian dinner that won’t break your routine or the bank. Here’s how this sweet-potato-and-collards bowl is done.

First, preheat your oven to 400°. Those sweet potatoes need to be peeled (or scrubbed super-thoroughly) and then cut into one-inch pieces. It’s not the most fun part of this recipe, but it’s a pretty good stress release, so channel the rage you’d experience if you were at the back of a three-block-long line at the DMV. If you don’t get the size exactly right, it’s fine (but keep an eye out since larger pieces will take longer to cook through, and smaller ones may shrivel and burn faster in the oven). Throw those chunks into a large bowl. Next come the scallion slices. Add in thin slices of the white parts and some of the green parts close to the white part. Reserve the softer green top slices for later.

Sweet-spicy magic comes together here. Toss the sweet potato and light scallion slices with 2 tsp. freshly grated ginger, 1½ grated garlic cloves, 1 thinly sliced Fresno chile, and ¼ cup coconut oil together in that large bowl. You could chop the garlic and the ginger, but grating is easier and coats the sweet potatoes more thoroughly and evenly. You could probably even switch up the chiles involved if you don’t have access to Fresnos; you will want heat though. When that’s done, shower the mix you just put together with salt and pepper, then scrape it all out onto a rimmed baking sheet and roast.

The recipe says to rotate the baking sheet halfway through to ensure that everything cooks evenly. My idea of a good weeknight isn’t reaching into an infernal oven, so I didn’t do this and my potatoes turned out fine (a.k.a., I forgot, and it was all good!). Either way, you’ll want to let them go in the oven until the potatoes are tender and begin to brown, about 35–45 minutes. When they come out, you’ll be shocked by how flavorful all of the chiles, ginger, scallions, and garlic made them. They barely resemble the marshmallow casseroles you get at stressful family gatherings. Instead, they lend the potatoes a low, slow heat that makes you want inexplicably want to pour yourself a tequila. So, great.

The sweet potatoes are only half of the equation; you are also going to be making collards. Which means you’ll need to multitask. You’ll want to get started on your collards about 20 minutes after your sweet potatoes begin roasting. To occupy those 20 minutes, take a little nap or watch a quick episode of a comedy on Netflix you’ve promised your friend you’d see. (I called my mom to say hi.) When 20 minutes is up, begin de-stemming the collards or kale. The easiest way to do this is to make a loop by touching your forefinger to your thumb, put the bottom of the stem in the other hand, and using that hand-loop, pull against the leaf until the leaf has detached from the stem. Worst case: Just use a knife and cut the leaves away from the stem. Tear the leaves into pieces, about 8 packed cups total. Even if you’re a rabbit, for this recipe, you’re not going to want to chew through the stem. In some other recipes, sure, go for it, because fiber or something.